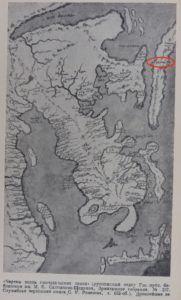 According to Krauss (1986), the first documentation of an Alaska Native place name by outsiders is found on a map in Semen U. Remezov’s atlas entitled Remezov’s atlas Sluzhebnaya Chertezhnaya Kniga. The map itself is based on based on info from Atlasov and Traurnikht (ca. 1700) and was originally published in color. The copy here is reproduced from Efimov (1950).

The map depicts Alaska as a peninsula and includes the place name Kынынцы (Kinintsy), which is probably a rendering of the Diomede name Kɨɨɣɨn.

The USGS Geographic Names Information System (GNIS) provides a comprehensive online reference to place names in the United States. While the database is focused on official names, some indigenous names are listed as alternate names in the database. However, the database has several limitations which limit its usefulness for documentation of Native names. The GNIS system fails primarily because it is does not handle multilingual names. The name of a place is not absolute but rather relative to the language which is used. The GNIS approach assumes English as the language of naming, treating names in other languages as variants of the official English name.

The GNIS entry for Arctic Village lists a variant name of Vashraii K’o,o. The actual name is Vashrąįį K’ǫǫ, with nasal hooks under each of the vowels. The nasal hooks do not appear in the GNIS database, perhaps due to the inability to handle unicode characters or due to an unfamiliarity with the language. Indeed, nowhere is Gwich’in identified as the language for this name.

The GNIS entry for Mt. McKinley contains 47 alternate names, many of which are Native names. However, for each of these alternate names the name of the language is not identified; the source is either not identified or is a secondary source; and there is no information about meaning. Yet, we know that the name of this peak varies depending on the language in which it is named. For example, Dghelay Ka’a (Dena’ina), Dinadhi (Tanana), or Deenaalee (Koyukon).

The State of Alaska has recently recommended several Native names for official recognition by the US Board of Geographic Names. One of the first of these to be recognized was K’esugi Ridge, from the Dena’ina Athabaskan name K’esugi. Although this name is often reproduced incorrectly without the apostrophe following the initial letter, the official name does contain the apostrophe, following the standard Dena’ina orthography.

See the Geographic Names Program website for information on how to submit a name proposal.